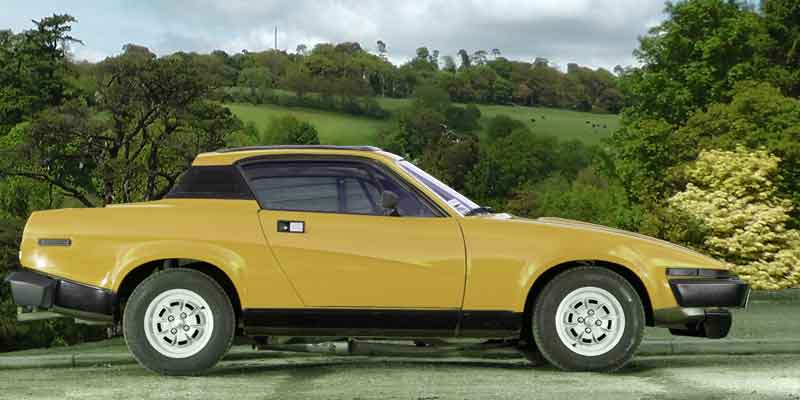 The Triumph TR7 could, indeed should, have been an overwhelming success. Let's face it, at the time that it was launched it had very little competition in the sports car market. However it eventually faded away and died, partly due to circumstances beyond its own control, and partly through management inadequacies.

It's predecessor, the TR6, was a raucous, full-blooded man's car but those very qualities that made it so also made it unsuitable any more for the all-important American market, where safety and emission standards meant it could no longer be sold there. British Leyland decided to solve the problem by replacing it with an anaemic shadow of it's former self, now labelled the TR7.

Initially it was well received but it soon became apparent that the two litre four-cylinder engine, built for the Triumph Dolomite saloon car, was anything but a sparkler. What made it worse was that it was initially available as a coupe only, again owing to American safety legislation. The British sports car fraternity was unimpressed.

What didn't help was the design of it. It had a wedged shaped front created by Harris Mann, designer of the ubiquitous Allegro, and the racing car style Triumph logo, surrounded by a winner's laurels, on the front of the bonnet was, to put it bluntly, ridiculous, given it's barely adequate performance.

It wasn't as if the car couldn't have been improved. A V-8 powered model was quite successful in rallying, but unavailable for several years to the buying public. The wedge shaped front, in any case, made it impossible to fit better engines, such as the 16 valve Dolomite Sprint engine, without major modifications.

The fatal blows however came as a result of the usual British Leyland problems.

Initially the TR7 was built at Speke. Labour relations there, however, were abysmal with frequent strikes and poor quality workmanship. Prospective buyers heard all about these problems and stayed away. Production was eventually moved to Coventry, and then later to Solihull; quality improved somewhat but the damage had already been done to it's reputation. Plus the disruption which entailed from manufacture at three different locations didn't help with quality control or consumer confidence.

In the late 1970s sales were sluggish and as a desperate measure British Leyland decided to axe the MG MGB since they thought that buyers would go for the TR7 instead. They didn't. By then other competitors had arrived and by 1981 it was dropped completely, with just over 112,000 sold over it's entire lifetime.