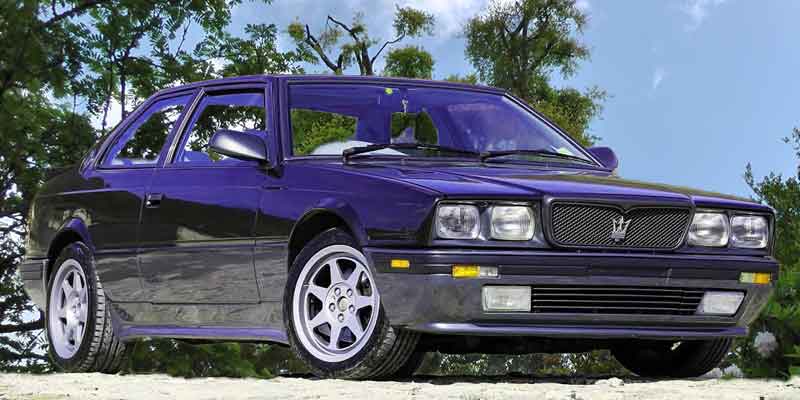 Back in 1975 Maserati, then owned by Citroen, was in trouble. Debts were mounting, and there seemed no possibility of the company ever turning a profit, so Citroen put it into liquidation. Many mourned the fact that an iconic sports car manufacturer, which had lasted for almost 40 years, was about to vanish from history.

Then up stepped Alessandro de Tomaso! With a background of both racing and building supercars, this Argentinian was encouraged by the Italian government to step in and try to save one of the most famous names in Italian sports car manufacture. The company itself cost him very little; however he also took on the company's debts, which had risen by then to around £3.5 million.

He seemed to be in no rush though; and it took as long as five years, until 1981, before the Biturbo was launched onto the market with great fanfare.

Whereas earlier Maseratis had competed against the top supercars, this was recognised as being a very risky market and a decision had been made to step down to a more mass-selling level, and the Biturbo was pitched into the same market as the BMW three series. Initially a four seater coupe, it boasted a two litre V6 engine with no less than two superchargers; this gave it a top speed of 132 mph. Cheap it was not; however the interior was luxurious, featuring swathes of sumptuous Italian leather created by fabric designers Missoni. It may not have been a traditional exciting Italian sports car but it soon attracted a good number of buyers who appreciated not only the appearance of the car but also the Maserati name.

Sadly, the attractive design was not matched by build quality. Handling was not up to the demands of a car with such a high maximum speed; and the turbos suffered from a time lag which made overtaking very much a hit and miss affair. Electrical equipment failures became rife; and smaller components were of generally poor quality. Many buyers were complaining that their cars spent more time being repaired than on the road.

The car was introduced to the UK market in 1986 but spare parts were expensive, and difficult to get hold of, which again meant long delays to repair these cars after their many breakdowns.

It is hardly surprising that many Maserati fans now prefer to forget that the Biturbo ever existed.