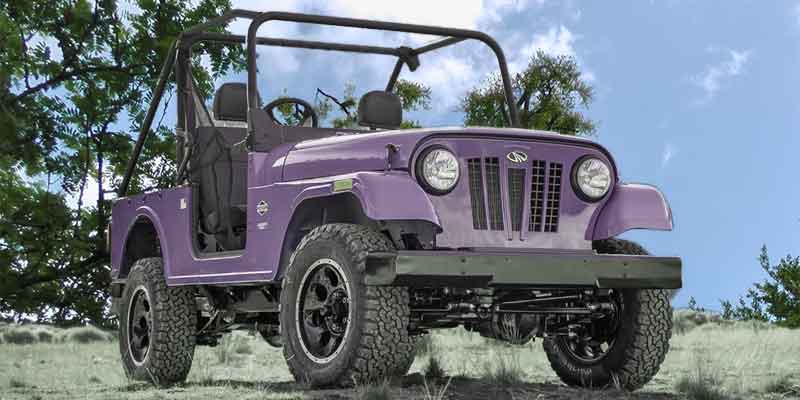 Making copies of antiques is usually the province of shady villains working down backstreets, creating fake Chippendale furniture or base Roman coinage to flog to unsuspecting tourists. Do they have licences to do this? What do you think?

One company that is licensed to reproduce antiques, though, is an Indian concern in Bombay, called Mahindra and Mahindra. They didn't produce antique chairs or Greek statues, but an antique vehicle; namely the Willys CJ jeep.

We have all seen the old films and newsreels of the original Willys jeep being driven around the battlefields of World War II by tough, heroic American officers. It was an excellent, reliable means of transport and arguably the right vehicle at the time for the purpose for which it was intended.

Move ahead to 1954 and the four-wheel-drive Willys CJ was neck and neck with the Land Rover for the title of the best all-round rough terrain vehicle in the world. That was a long time ago though. Things have moved on. Standards of comfort and reliability have improved dramatically since then but Mahindra stayed stuck in the 1950s; apart from upgrading to a Peugeot diesel engine the vehicle was almost identical to the 1954 one when it was finally withdrawn from the British market (where it was sold under the name 'Indian Brave') in 1994; 40 years later!

Their jeep was, undeniably, rugged. You could hit it with an axe and the axe would come off worst. Unfortunately though that was as far as it went. The build quality was frankly awful, the ride was practically guaranteed to shake fillings out of teeth and they ran as roughly as you would expect from a 40-year-old design which was assembled in India and then finished off for the UK market in Greece.

Strange to say, despite their low price at the time of around £7000 the British buyers were unimpressed by this throwback to a much earlier motoring age and so few were sold here. Come to think of it, there are no actual records of any been sold here despite an importer claiming to have more than 100 dealers lined up!

Finally, and inevitably, they were were unable to meet European safety and environmental standards and so they are no longer available in this country; but nevertheless over half a million this out of date boneshaker were sold in all. All I can say is thank heavens for EU regulations.