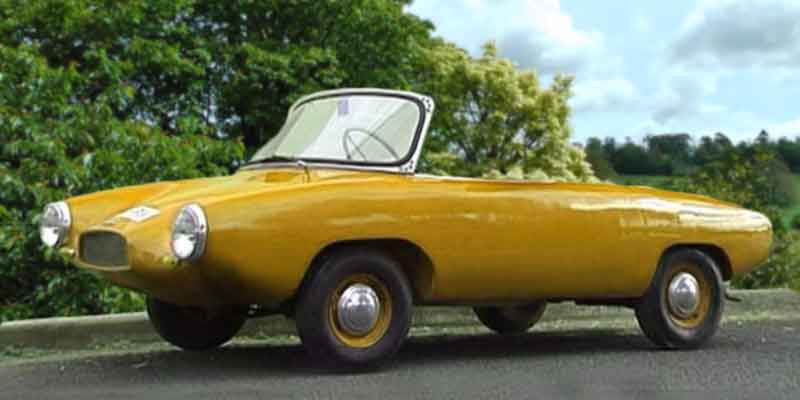 Back in 1963 an Australian manufacturer of washing machines and cement mixers decided that he was ideally qualified to build cars as well, and he proudly announced that he would export them to Britain and the rest of the world. We are very fortunate that he failed in this respect.

A saloon car and a 'sports' version were produced. Both were made of glass reinforced plastic, although the dashboard was composed of something which looked like cardboard. The saloon had two seats, plus a space behind for some luggage or shopping. However, there was no access to the rear to this area. To get round this the front seats were made easily detachable, so to stow away your shopping you simply had to lift off the doors, remove the seats, pack your shopping in the back, and then reverse the process. Simple.

Power (if that is the correct word) was provided by a 324 cc Villiers two-stroke engine which required one part of oil to every eight of petrol; the result was a noisy, shaky, smoky contraption at the front of the driver and passenger, which produced a less than enormous 16 brake horsepower. Those who love to listen to a two-stroke engine being thoroughly thrashed were in for a treat, thanks to the total lack of noise insulation and a constant reverberation through the cabin.

The claimed top speed was 60 mph but fortunately no one was able to get it to go over 50. This was on the flat, or going downhill; with the driver and passenger it was a tossup whether or not it would make it up a hill, or not. There were drum brakes all round, which were adequate provided they were not used over 40 mph, which tended to make the car somewhat unstable.

The gearbox was absolutely unique. There were four gears, which were used for both going forward and backwards! To go into reverse, it was necessary to turn the engine off, switch to select reverse, and the engine could then be started again, only this time it ran backwards. This meant that thrill seekers could drive just as fast backwards as forwards. Strangely enough no other car manufacturer has ever adopted this ingenious idea.

The 'sports' car version had the same mechanics as the saloon, only in this case there were no doors. Who needs them anyway, when you can simply step into the car? This had a 493 cc engine, which made it even more lethal than the saloon.

Fortunately for humanity, the Zeta was launched at the same time as the Morris Mini, a proper car which sold for only £60 more. Production staggered on until 1965, but it wasn't until the following year that the last of the production run was sold off.

Altogether around 400 of these machines were sold. If the owners made a really bad bargain at the time they bought them, they would have done well if they had held onto them; they can now fetch very high prices from collectors and museums that are eager to show how a car should not be made.