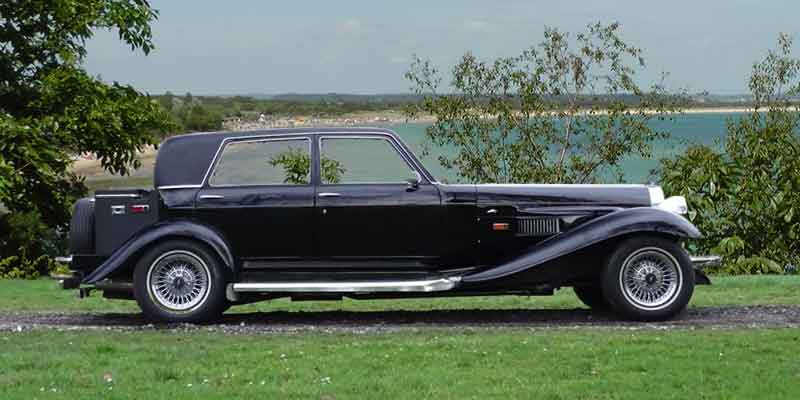 During the 1960s there was a craze for replica cars; these were built to look like iconic cars of the past, but using modern technology. Unfortunately so many of them ended up looking pretty ridiculous, with more ostentation than practicality. The Panther DeVille fell firmly into this category.

Created by Panther Westwinds, a British speciality car manufacturer, it was launched onto an incredulous market in 1975. This was one big car. It was intended to copy the 1930 Bugatti Royale but it never quite made it; indeed the door structure was identical to that of the Austin 1800. Real vintage car enthusiasts were appalled. However they were not the ones who were going to be buying this monster; it was designed more for the tastes of such aficionados of good taste as Oliver Reed and Elton John.

Jaguar six and 12 cylinder engines gave it a maximum speed of up to 135 mph; coupled with the heavy weight of the vehicle, and the complete lack of aerodynamic styling, petrol consumption, although never specified, must have been stratospheric. Even more stratospheric was the pricetag; a new one would set you back over £39,000, a fortune in those days.

Each one was individually built to a client specification, and since many of the buyers had, to put it bluntly, more money than taste such abominations as goldplating, pink and gold paint work, spare wheels mounted on the front mudguard, ridiculous little boxes on the back instead of a proper boot, and garish interiors were the order of the day.

On the plus side, the quality of finish was excellent, with the finest craftsmen fitting them out and handpainting them. However the sheer size of them made them completely impractical for most motorists; swinging them round country lanes was pretty much out of the question.

Hardly surprisingly the majority of the 60 or so Panther DeVille's that were built were exported to the Middle East, where their owners didn't really have to worry too much about what they cost, or the huge quantity of fuel that they consumed.

Okay, this car is possibly the most appallingly bad taste automotive construction ever built, but it still has a certain charm, if only as an icon of an era in which ostentation mattered more than common sense.